Because women rights are human rights

One moment can shape the rest of your life. That’s what happened to Kateryna Levchenko when she was a post-graduate student. She got pregnant with her first child. While this moment should have only brought joy, she faced relentless pressure from the doctors and her colleagues to stop working and become a stay-at-home mother.

“It was the first time in my life that I faced such discrimination. I couldn’t forget this day until now, more than 28 years later,” says Dr. Levchenko. As a philosophy student, she studied discrimination of all kinds but experiencing it changed everything. She decided to dedicate her life to defending human and women's rights.

FROM CIVIL SOCIETY….
She started at the grassroots. In 1995, she participated in the landmark NGO Forum on Women at the Beijing Conference. It was a turning point for gender equality, with 189 countries adopting an agenda for women’s empowerment. On a personal level, it was the catalyst that led to the creation of La Strada Ukraine a national organization working to promote women’s and human rights in all spheres of society and the government. 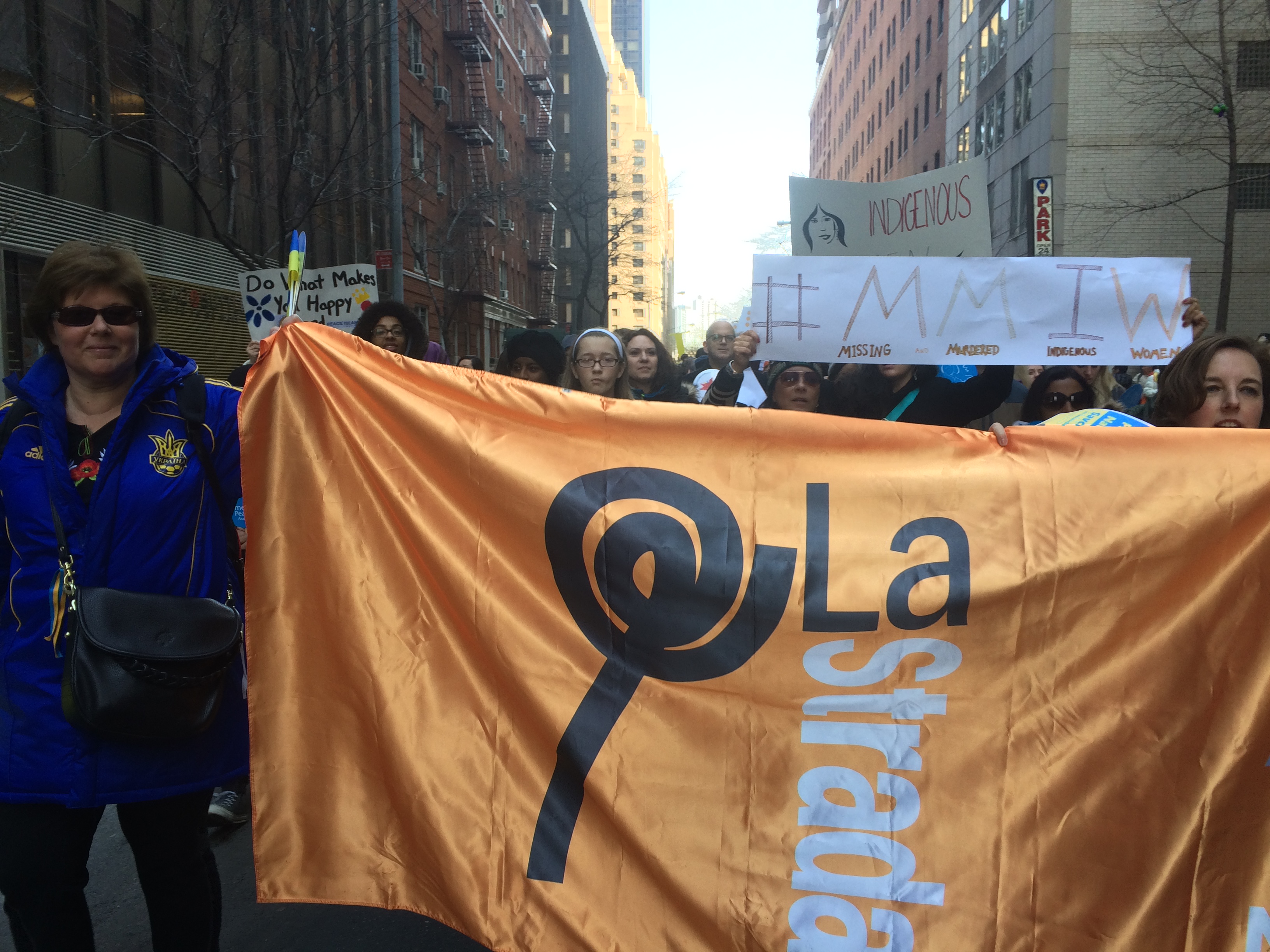 Kateryna Levchenko, in a protest to defend the rights of women. Photo: La Strada

“La Strada is not only a place for hope,” says Levchenko. “It’s part of my life.” She was president of the organization for 21 years. In that time, she advocated for an important set of legal acts in Ukraine, including a law ensuring equal rights and opportunities for women and men, one combatting trafficking in human beings, and one on the prevention of domestic violence.

“The women’s movement is part of the human rights movement of Ukraine. It is a very important factor for democracy, and for establishing the conditions and support for Ukrainian independence.”
Kateryna Levchenko

.… TO THE UKRAINIAN GOVERNMENT
In addition to her role at La Strada, she became active in the Ukrainian Parliament and international organizations like the OSCE and the Group of Experts on Action against Trafficking in Human Beings (GRETA). In 2018, her career took another turn with her appointment as the Government Commissioner for Gender Equality Policy. She is still grateful for the amazing support she received in that role from non-governmental organizations. Half a year before her appointment 100 organizations sent a letter to the Prime Minister of Ukraine stating that Kateryna Levchenko was their nominee for the position.

Her experience as an activist and an academic prepared her for success in the role. She was able to make the connection between the widespread lack of cultural understanding about gender equality and the gaps in expertise in the government and its institutions.

Today, as a Government Commissioner, she improves the coordination and integration of gender policies in all ministries. She also promotes gender equality throughout security and justice institutions which have been key interlocutors in her work under Ukraine’s 2nd National Action Plan under UNSCR 1325.

Implementing effective gender policies remains a challenge. Dr. Levchenko puts in a lot of effort to explain how women and men have different experiences and that equality between them is an essential part of the foundation of a non-discriminatory, peaceful, and sustainable society.

A PERMANENT STRUGGLE TO BREAK STEREOTYPES
During her entire career, Kateryna Levchenko  has seen a lot of positive changes in Ukraine. In the security and defense sectors, for example, the armed forces now count in 30 times more women in the ranks than in 2008. Levchenko says it takes time to break gender stereotypes.  Many people still believe that the armed forces are not for women, but this increase in recruitment is a clear sign of a changing mindset.

Breaking gender stereotypes means showing that gender inequality is not only a women's problem. In the summer of 2021, the Ukrainian Parliament adopted a new law offering two weeks of parental leave for fathers of a newborn child. “Stereotypes have negative consequences both for men and women. It is important to promote equal rights and opportunity between men and women with concrete actions,” says Dr. Levchenko.

There is still a lot to do, but today, when she sits at the table to discuss gender issues, she can see the change in attitude. She is not stopping there though; starting this year she’s bringing her knowledge and experience from her home country to the benefit of the Council of Europe, as the Vice-Chair of the Gender Equality Commission. Kateryna Levchenko is also Ukraine’s candidate to UN Committee on the Elimination of Discrimination against Women for the next elections (2022).

STORIES FROM THE FIELD
We are highlighting some of our many partners who have made extraordinary contributions to the field of security sector reform and good governance in their countries.