Putting human rights on the agenda

The Palestinian Security Force was created after the signing of the 1994 Israeli-Palestinian peace agreement, to ensure security and law enforcement within the areas administered by the Palestinian National Authority. Back then, Dr. Omar Rahal was already known as a long-time Palestinian civil activist and human rights defender. Observing the changes happening in his country, he realized that most of the Palestinians joining the new Force were not formally trained in a military or security academy. They were fighters in the Palestine Liberation Organization in Lebanon or ex-political prisoners and activists of the First Intifada. And the only law regulating the work of the Force was nearly 20 years out of date.

"I was fully convinced as a human rights activist that all efforts should be taken to contribute to building better security institutions that respect human rights and protects citizens’ dignity,” says Dr. Rahal. In 2007, with his extensive knowledge of the unique complexities of the Palestinian context, he created SHAMS, the Human Rights and Democracy Media Centers with one clear goal: to influence the establishment of democratic reforms and the rule of law.

A STRONG DETERMINATION TO BUILD TRUST...
In the beginning, Dr. Rahal faced resistance and suspicion from those in the Palestinian security establishment who were not convinced of the need for training or reform. He and his team were held off; they did not receive any answers to their letters or phone calls.  But they were determined and knew how important it was to work with the Force to achieve their goals. They continued their efforts until the security forces were fully convinced that SHAMS had no hidden agenda; that the activities and interventions were in favour of the new system, and for the good of the Palestinian people. “The value of impartiality, the good reputation, the history, and the support of DCAF was a great help in making these efforts fruitful,” according to Dr. Rahal. Soon, the meetings with Force leaders and politicians reflected the inevitable need for laws to effectively regulate the security sector.

...TO ACHIEVE REAL CHANGE...
With the help of DCAF, in 2011 Dr. Rahal established a community safety council in the government of Jenin, in the north of the West Bank. The council performed a root-cause analysis of community safety issues and developed a plan to create an environment in which citizens live in peace and security under the rule of law, according to their beliefs and traditions. Building on this achievement in Jenin, President Mahmoud Abbas issued a decree establishing community safety councils in all the Palestinian governorates. It is one of the biggest achievements of Dr. Rahal: the demonstration of how SHAMS years of effort and determination have successfully transformed an idea into a law.

Due to its hard work, SHAMS is now a member of the National Committee for Complaints at the Council of Ministers representing civil society organizations, adding value to SHAMS work, and supporting its efforts to reform the security sector.

“You must work with all and not be elitist. And you need to go to the field and meet the people in person.”
Dr. Oman Rahal 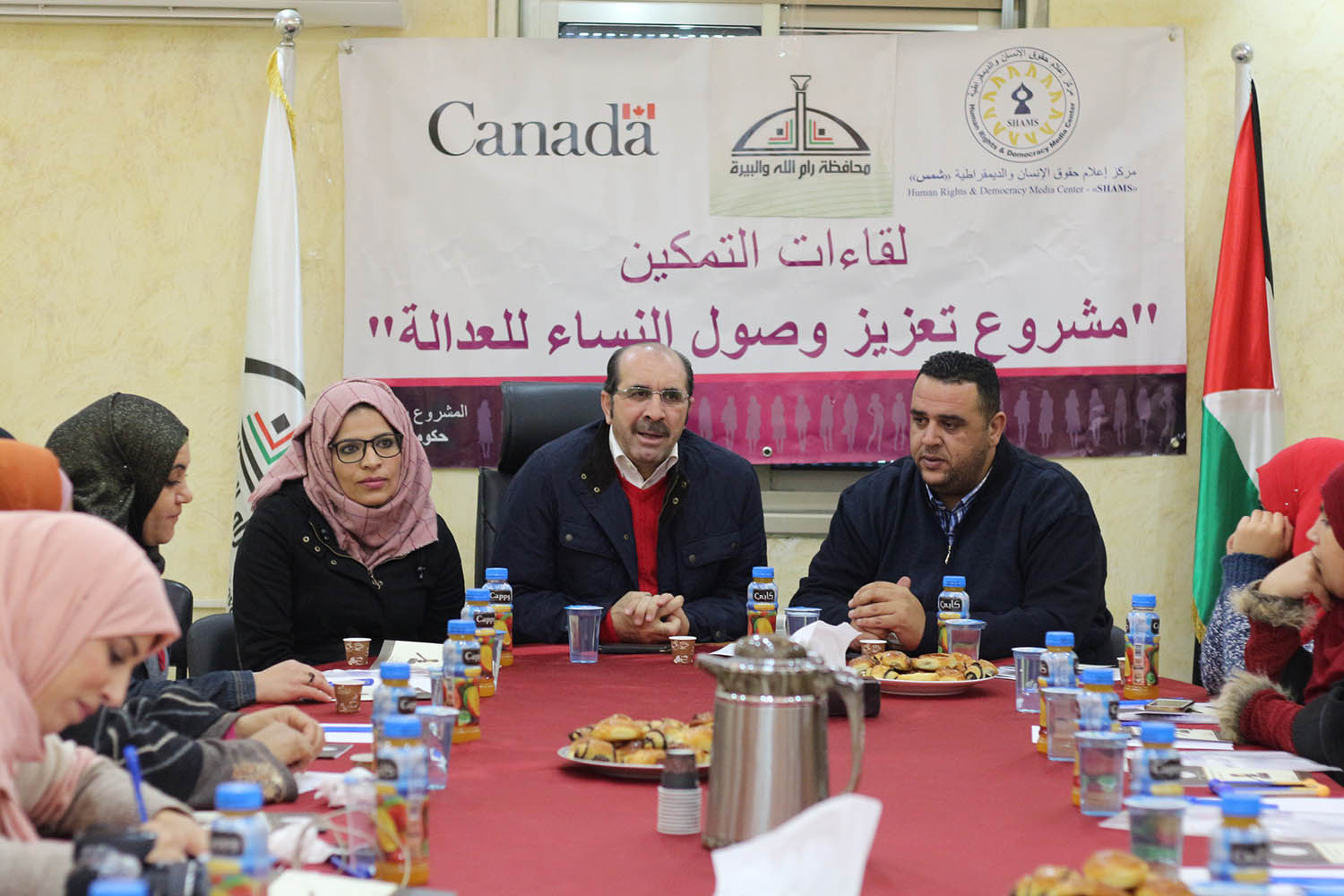 Dr. Rahal in a meeting about how to strengthen women’s access to justice. Photo: SHAMS

...AND TO BRING PEOPLE TOGETHER.
SHAMS and DCAF were among the first organizations in Palestine to successfully bring together the security sector, civil society organizations, grassroots organizations, activists, and citizens. It was a challenge because the concept of civil society working hand-in-hand with security forces was difficult for some people to grasp. They misunderstood SHAMS role and thought Dr. Rahal and his team were spies working for the Intelligence Services. Dr. Rahal overcame this confusion through the credibility and expertise of SHAMS members and DCAF staff. “Programme and project managers, coordinators -- they were all there to stand behind us in the field to provide good advice,” says Dr. Rahal.

Since 2007, SHAMS has held open sessions between citizens and the Force in focus groups and the media, and organized training sessions and conferences to bridge the gap between both sides.  Both citizens and officers have received training in SSG/R, human rights, democracy, and community safety.

Now, the Force approaches Dr. Rahal when there is a need for awareness or training for its officers. Dr. Rahal hopes that “this success can inspire more civil society organizations in the Arab world to follow this model”.

STORIES FROM THE FIELD
We are highlighting some of our many partners who have made extraordinary contributions to the field of security sector reform and good governance in their countries.