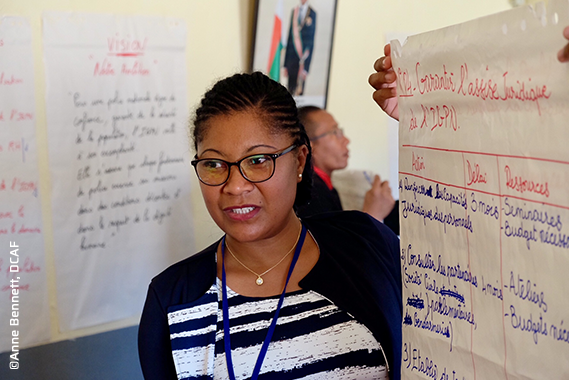 Strengthening security sector governance and the rule of law in Madagascar

Context
For more than 40 years, Madagascar has been embroiled in one political crisis after another, which has greatly undermined the nation's social fabric and institutions. As the country emerged from the 2009 crisis, it faced a number of governance challenges, including institutional deficiencies in the justice and security sectors; a highly politicised environment and interference of defence and security forces (DSF) in political life; increased distrust from the general public towards law enforcement agencies; and absence of effective oversight of the justice and security sectors by parliament, civil society and the media.

In 2015, Madagascar became a member state of DCAF’s Foundation Council and has since received our support in the implementation of the SSR process.

Objectives & DCAF approach
Since 2016, DCAF has supported the SSR process by engaging in initiatives whose long-term aim is to increase the general public's trust in DSF.

With that in mind, DCAF is actively involved in projects which set out, on the one hand, to improve the internal and external accountability of security forces and, on the other hand, to implement community policing initiatives.

Results
So far our intervention in Madagascar has enabled the launch of:

Donors
We are grateful for the support of: