An important milestone in the reform of the Congolese National Police

Over the past two years, the Democratic Republic of Congo has faced many crises and conflicts, particularly in the Eastern region, still currently under siege. The 2018 elections brought an end to a two-year period of political crisis and offered new perspectives through the creation of a strategic national development plan, which includes the reform of the Congolese National Police.

DCAF, together with the Belgian development agency ENABEL and the NGO COGINTA, is taking part in the implementation of the third phase of the European Union-funded support programme for the reform of the Congolese National Police (PARP III).

BEING WELL PREPARED TO BE MORE EFFICIENT
The experts from COGINTA, ENABEL and DCAF, worked for over six months to get the project off to a good start based on the consultations carried out with all the national actors during the evaluation mission of the programme.

To build up local ownership and sustainability, the PARP III team facilitated collaboration between key partners at all levels. It led to the creation of a political and strategic management mechanism including a Technical Committee and a Steering Committee chaired by the Deputy Prime Minister, Minister of Interior, Security, Decentralization, and Customary Affairs. Without these committees, policy and strategic coordination of the programme would not be possible.

"The mobilization and involvement of all stakeholders, government institutions, police, parliament, civil society, and media are paramount to move the programme and police reforms forward and get concrete and sustainable results."
Fatoumata Sira Diallo, Team Leader DCAF in the DRC

FIRST SUCCESSFUL STEPS
This work resulted in the launch of the programme on June 21 in Kinshasa with the presence and support of high-level Congolese authorities, the European Union's ambassador to the DRC, international partners involved in the reform, representatives of the Congolese police, civil society, and the media. 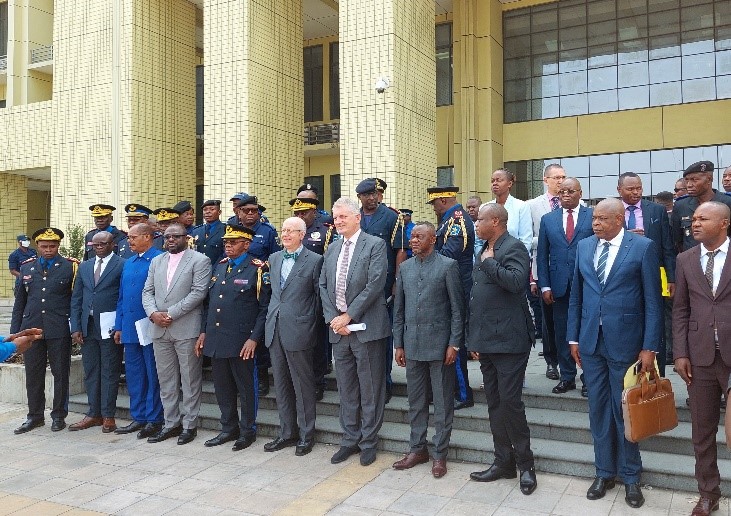 "Building homeland security and building the police, is building the foundation of a modern state. It's something we build because we believe in building institutions. Without institutions at the global level, at the regionally, at the local level, our world cannot function. People need strong institutions. So it is a partnership that we must have together to build these institutions."
Jean-Marc Châtaigner, European Union's ambassador to the DRC,
at the launch ceremony of PARP III

At the end of the launch ceremony, the Steering Committee validated the programme's roadmap, marking the beginning of the next steps. "It shows that the hard work and efforts made over the past six months with national partners have paid off," says Fatoumata Sira Diallo.

Activities will start in Kinshasa and the provinces of Equateur, Kasai, and Ituri to contribute to improving the police’s accountability and professionalism, and security management at the local level.

To learn more about the application of security sector governance principles in police reforms, download our "Police Reform" backgrounder.