Devising a strategy for the security of rural Colombian women

Poor access to security and justice is among numerous challenges facing millions in Colombia, a country grown so inured to conflict that, for many, its end in 2016 remains cause for scepticism and suspicion. This is especially true for the innumerable women in Colombia’s rural communities that have spent generations isolated from the state geographically, culturally and institutionally.

Financed by the Norwegian government and titled Promoting spaces for dialogue for women on security priorities in Colombia, the research investigated barriers to security and justice for Colombian women in conflict-affected rural areas, looking in particular at support systems and gender-based violence.

The project culminated in recommendations for the Colombian state and for the National Police as, respectively, guarantor of security and first responder to personal security threats. These recommendations, detailed in the project report, Transcending the Long Path, call for an effective, context-sensitive and holistic approach to security provision to build trust between Colombia’s rural women and the State.

Diana García (pictured below), a CIASE researcher and activist who worked on the project, described rural Colombia as ‘contexts within a context’, in reference to its diverse geography and demographics, where institutional or state support for many lie beyond desert, jungle or mountains. This, coupled with a justice system designed for large urban areas, such as Bogotá, creates a critical impediment to women’s access to security and justice.

Additionally, Ms. García also identified a number of social barriers, including ‘communitarian censorship’, which prevents women from reporting violence lest it detract from the community’s more ‘significant’ conflict-related suffering. She terms this a ‘hierarchy of victimization’. 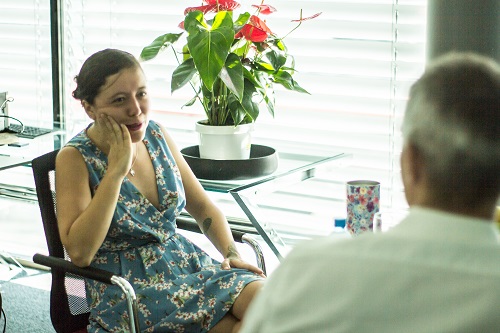 “If you are a victim of armed conflict you are a more important victim; if you are a victim of sexual violence or of domestic violence in day-to-day life, you are lower down the hierarchy. This ‘hierarchization’ of victims has meant many victims don’t talk about day-to-day life violence, and they only concentrate on the violence of the conflict. They have to be the good wife, or the good widow, even if their husband is or was also their abuser.”

One of the investigation’s more surprising findings was that many rural people had no knowledge of the peace accord, no understanding of the blue-clad UN peacekeepers, and no notion of the difference between state and government.

“Women and communities were very fearful, but also the police were afraid of what could happen. This wasn’t just a problem of power, but of trust. We told the police they had to build trust from the beginning, reach out your hand to people in another way, don’t just be the authority.”

Promoting spaces for dialogue for women on security priorities in Colombia was a pilot project that centred on communities in five municipalities where FARC guerrillas were present but which differed topographically, culturally, ethnically and politically. DCAF and CIASE held consultations in each municipality, talking to 363  women of all ages and backgrounds.

Explaining the partnership with CIASE, the Head of DCAF’s LAC Unit, Cristina Hoyos, said part of DCAF’s role was to facilitate dialogue between CIASE and the police by helping to overcome perceived ideological incompatibilities. This was key at a time of uncertainty in Colombia in the first half of 2018, with congressional and presidential elections taking place during the time of project implementation. DCAF was able to secure the continuous support of the police at this precarious time through continuous political dialogue and outreach.

“The first meeting was very telling – police on one side, CIASE on the other, no trust at all. It was a question of trying to convince the police of the importance of the work and that CIASE was the right partner. It took time, I think three trips to Colombia, to build this confidence, but when we started to work together it was very positive.”

This persistence paid off: DCAF, CIASE and the police collaborated on mapping a way towards creating better response protocols for cases of violence against women in rural areas. This included the police’s active integration of the recommendations into their gender mainstreaming efforts. 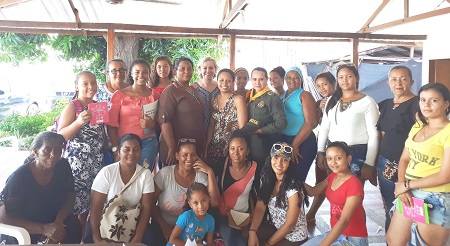 Ms Hoyos added: “CIASE has a very feminist perspective, so how do you translate this feminist language concerning rural areas and compress it into concise recommendations for the police, because the police’s thinking is different. So, working together, DCAF’s LAC Unit and the DCAF Gender and Security Division, developed the recommendations, and then the police endorsed them gladly and wholeheartedly.”

In its ongoing support for the project’s methodology and outcomes, the Norwegian Government has decided to fund a second phase, which will begin this year. The work will continue in the five original regions, and will also be rolled out to five new areas.